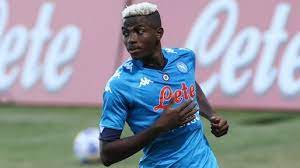 One of the big talking points on this week’s episode of The Hot Seat was Victor Osimhen’s maiden season at Napoli.

Goal’s Oluwaseye Omidiora recently published an article in which he discussed the Nigeria frontman’s maiden campaign in the Italian top flight.

For the Nigerian writer, his first taste of Serie A had been a cautious success.

Admittedly, Osimhen hadn’t secured Champions League qualification for Napoli, while his campaign was also punctured by fitness issues, with the Super Eagles attacker going through a barren period during the campaign.

He ended the year with 10 goals, a modest if admirable return.

On one hand, for a player signed for €70 million, it’s a thoroughly disappointing return. For this kind of fee, Napoli could surely have identified and recruited a goalscorer who could have fired them to the Champions League.

Instead, they plumped for a forward who had netted 13 in his maiden Ligue 1 season, hoping both that Osimhen would be a long-term investment and could hit the ground running in Italian football.

Upon his arrival, there were comparisons with Partenopei great Diego Maradona, which certainly weren’t helpful, and admittedly, there were a series of encouraging performances.

Osimhen looked the part at times, got the best out of those around him, and was influential since March.

Since returning from the international break, he had a hand in nine goals (seven goals, two assists) in 11 games, and pushed the Naples heavyweights close to the top four.

Was it a purple patch, or was it evidence that Osimhen had finally turned the corner in Serie A and found his feet?

Either way, it wasn’t enough to take Napoli back to the top table of European football, nor was it enough to save Gennaro Gattuso, who was dismissed at the season’s end.

The departure of Gattuso represents another potential problem on the horizon for Osimhen.

He clearly enjoyed a tight bond with the ex-Italy midfielder, who sought to build his attacking unit around the Eagles forward, and Osimhen must now adapt to life under yet another new manager—with Luciano Spalletti appointed as the Napoli boss.

Goal Africa readers, like Omidiora, are confident that—despite the concerns—Osimhen is set for a big season in 2021-22.

According to a recent poll, Goal readers backed the forward to improve on his numbers next season and hit between 15 and 20 goals for the Naples giants in the league.