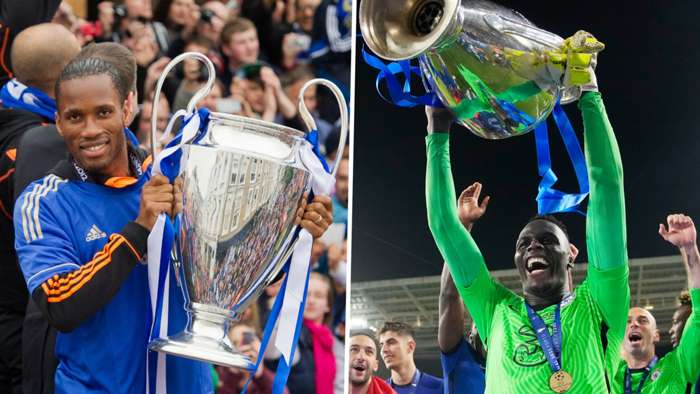 The Blues legend and Senegal goalkeeper won the European Cup nine years apart, but their routes to success ought to warm admirers’ hearts

The image of Edouard Mendy falling to his knees and collapsing to the turf after Antonio Mateu Lahoz’s final whistle on Saturday was a gratifying sight to behold.

Overwhelmed with emotion, those precious seconds were probably in the knowledge of his Chelsea side not only beating the favourites Manchester City 1-0, but also a recognition of how he got here.

Having been linked with a host of names last summer, from Atletico Madrid’s Jan Oblak to Burnley’s Nick Pope, if anyone had told Mendy he’d eventually be the cost-effective solution to the Blues’ Kepa Arrizabalaga problem and then claim the Champions League at the end of his debut season, he may have been filled with doubt and unbelief.

Saturday’s triumph was Mendy’s second piece of silverware — he won Ligue 2 with Reims in 2018 — but this represents the biggest of his professional career at the top level…and what a way to start!

For someone who was redundant at age 22 and considered quitting the sport altogether following his release by Cherbourg in 2014, his resurgence at Reims and Rennes have brought him to this point.

The West African was helped by the team’s solid defensive structure throughout the competition, but he most definitely gave a previously fragile backline the needed confidence to play knowing their towering keeper had things under control.

The 29-year-old saved a staggering 30 of the 33 shots on target he faced, a 90.9 percent success. Only Borussia Dortmund’s Roman Burki’s 100 percent beat the Senegalese stopper, but still, there’s a caveat that the Swiss keeper played only four games. Mendy featured in 13.

Becoming the first African goalie to play in a European Cup final since Liverpool’s Bruce Grobbelaar was no mean feat, and his inspiring story will be told for years to come.

A Mendy fact that may fly under the radar is his brief Marseille spell in the mid-2010s. The relevance of this is understood when you consider that Chelsea legend Didier Drogba also played for Les Olympiens in the early 2000s before his transfer to West London.

While that move to Stamford Bridge eventually saw him attain legendary status, the Ivory Coast icon’s early career struggles could have limited his ceiling before he eventually overcame injuries and physical struggles.

Drogba didn’t have the privilege of passing through any of the vaunted football academies; rather, he faced the possibility of not cutting the mustard in professional football in his early 20s.

A fairly successful spell at Le Mans and subsequently Guingamp prompted Marseille to take a chance on the striker in 2003, which landed him a big-money move to Chelsea a year later after the arrival of Jose Mourinho.

Safe to say his relationship with Blues supporters was at times frosty, with fans at Stamford Bridge at a time whistling and booing their frontman for his flawed gamesmanship and on-pitch antics.

If anyone had predicted the current hero-worship of Drogba at the time, the scepticism was going to be palpable.

This admiration for Drogba was cemented owing to his brilliance in the run to the club’s first Champions League success in 2012.

There seemed to be unfinished business in the competition for the centre-forward after his sending off in the final against Manchester United in 2008 put his teammates in the lurch.

He, not John Terry, was likely to be the fifth player to step up for that potentially winning kick that the English centre-back ultimately missed.

Knowing that side had regressed and were on the wane in 2012, the centre-forward was decisive in the round of 16 comeback vs Napoli at Stamford Bridge, netted the important winner in the semi-final first-leg vs Pep Guardiola’s Barcelona and had a huge say in the final on Bayern Munich’s turf.

Having missed the chance to have the last say four years earlier in Moscow, Chelsea’s clutch forward wasn’t to be denied his moment in Munich. He netted the pressure penalty to win Roman Abramovich the trophy he badly desired.

This year’s success is probably even sweeter, owing to the London side’s dominance of their opponents en route to victory in Portugal. Their triumph nine years ago was, for lack of a better word, fortunate and didn’t have the element of control Thomas Tuchel’s troops exhibited in the knockout rounds.

Even though he’s now 29, Mendy is just getting started at the Bridge. He was arguably their most important signing of the season, and the command of his area and extremely underrated ability on the ball have been noticeable in year one.

Drogba’s Chelsea story may never be surpassed but Mendy’s opening chapter in West London offers optimism over what’s to come next season and beyond. Both Africans walked problematic pathways to European glory and their influence in claiming the club’s continental successes will never be forgotten.