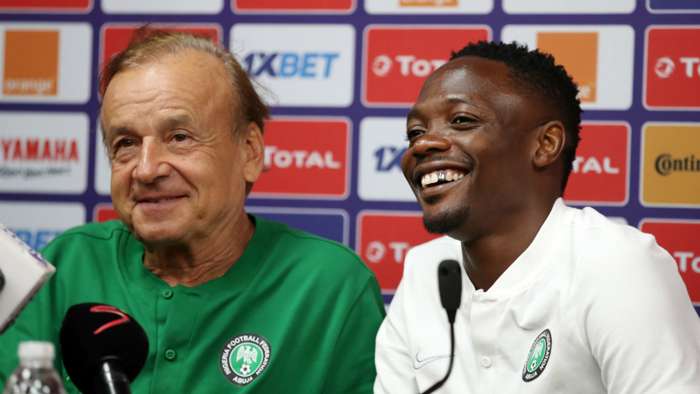 Nigeria’s preparations for the friendly against Cameroon received a massive boost following the arrival of Ahmed Musa in camp.

According to a post on the Super Eagles Twitter handle, the Kano Pillars star joined the rest of the squad on Wednesday morning.

The double-header against the former African champions was on the cusp of being cancelled owing to the withdrawal of several players.

With the presence of captain Musa, coach Gernot Rohr now boasts of 19 players in his squad for the showdown against Toni Conceicao’s men.

Speaking to the NFF media, coach Rohr has taken positives from the absence of key players while stating that the game against the five-time African champions would help his team prepare well for September’s World Cup qualification games.

“It was okay, we had 18 players [on Tuesday afternoon]. Some of them travelled in at night, so we were very careful as we don’t want to have any injuries,” the German tactician said.

“We will be 20 [on Wednesday morning] because two other players will arrive and we will try to have a good team. Although Cameroon have 26 players.

“The training session was okay; the condition was good. The grass was good, and the weather was not too hot. I think we can prepare well here in Austria.

“You see that so many players are not here for this test match. It’s an opportunity to try other players, to see new faces and then have the chance to something.

“It is also important to prepare well for the World Cup qualifiers against Liberia and Cape Verde. So, we must use this opportunity to be ready and have a good competition in the team.”

The last time the two countries met was in the Round of 16 of the 2019 Africa Cup of Nations in Egypt. Nigeria secured a 3-2 win thanks to a brace from Odion Ighalo and Alex Iwobi’s match-winning effort.