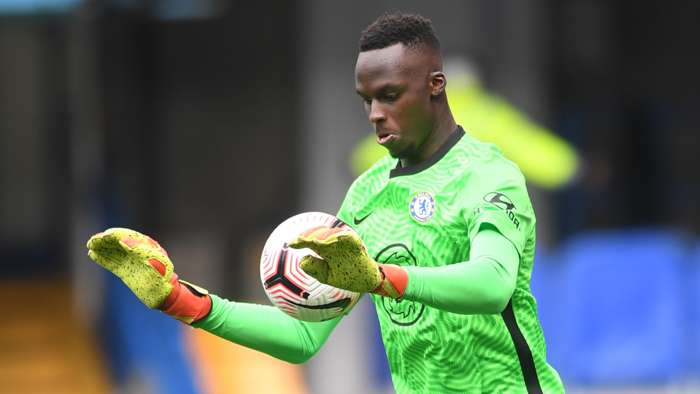 Edouard Mendy has set a Champions League record having made Chelsea’s starting XI for Saturday’s final against Manchester City.

Edouard Mendy becomes the first African goalkeeper to play in a Uefa Champions League final & the first since Bruce Grobbelaar in 1985 including the old European Cup. #UCLFinal pic.twitter.com/9xRdqA9s8q

He the first African keeper to play in the final since Bruce Grobbelaar in 1985.

The former Zimbabwe international was also in goal for Liverpool a year earlier when the Reds defeated AS Roma at Stadio Olimpico, Rome to claim the European Cup final in 1984.

With the scores ending 1-1 after extra-time, Joe Fagan’s men triumphed 4-2 on penalties as Bruno Conti and Francesco Graziani missed their kicks.

In 1985 Grobbelaar and Liverpool lost the European Cup final 1-0 against Juventus at Heysel Stadium in Brussels, Belgium.

Against the Citizens, manager Thomas Tuchel would be counting on the Senegal international to halt the attacking forays of Pep Guardiola’s men.

Mendy was signed from Ligue 1 outfit Rennes in a £22m ($31m) deal as the six-time English top-flight kings sought to find greater stability between the sticks as costly errors had crept into Kepa Arrizabalaga’s game.

He has since proven to be one of the bargain signings, making crucial saves for the Londoners who finished fourth in the 2020-21 Premier League campaign.

The Lions of Teranga star was a doubt for the big showdown following his knock against Aston Villa.

While describing Riyad Mahrez as one of the best African players, he revealed that the Londoners would do all it takes to emerge as European champions.

“I don’t think Riyad needs any introduction, he is one of the best African players and he has played at a very high level for several years,” Mendy told BBC Sport.

“He’s also had a complicated journey and he really didn’t give up and he deserves everything that is happening to him.

“He will be one of his side’s biggest threats – one of Manchester City’s assets.”

“This team [Manchester City] deserved this year’s league title, they were very good and very consistent throughout the year,” he continued.

“They deserve their title and there’s no arguing about that but now we are playing a final and it’s different. We’ll play for at least 90 minutes. And we will do everything to get this title.”