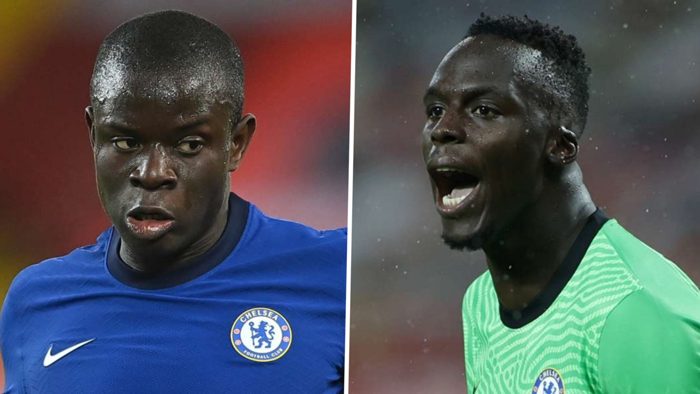 Injured Chelsea pair N’Golo Kante and Edouard Mendy could yet play a part in the Champions League final after making the Blues squad for Saturday’s showpiece.

The players’ participation against Manchester City has been in doubt after they sustained fitness problems in Chelsea’s last two Premier League clashes of the 2020-21 season.

But according to manager Thomas Tuchel, both Kante and Mendy have made positive progress in their recoveries and could feature in Lisbon.

“N’Golo is looking good and I hope he stays like that for Saturday,” Tuchel explained as he announced the 25-man squad which will travel to the Portuguese capital.

“Edou made a huge improvement with the management of pain from when the injury happened, which is good,” he added on the goalkeeper.

“We hope to have him back. If he is fit, then Edou will play.”

Kante was forced to sit out his side’s Premier League finale on Sunday after picking up a hamstring problem during their 2-1 victory over Leicester City on May 18.

Chelsea were then handed another blow at the weekend as they went down 2-1 to Aston Villa, as Mendy managed to complete just 45 minutes before being replaced by Kepa Arrizabalaga.

The Frenchman sustained a strong impact to his ribs after clashing with the goal-frame in his efforts to save Bertrand Traore’s opener, but tests subsequently ruled out any fractures or serious injury and he was able to return to training on Wednesday alongside Kante.

“Edou will play if he is fit and if he is not fit on Wednesday we will try on Thursday. And we will try on Friday and take the responsibility for this decision. At the same time, we have trust if he cannot make it. We have a strong guy on the bench with Kepa.

“Now the race is on. We are very happy first of all that the images don’t show that the injury is too serious. We are positive but every hour counts and hopefully the team around Edou and he himself can do enough. It will be a good boost for us.”

Chelsea are out for their second Champions League title on Saturday, having previously triumphed over Bayern Munich in 2012.

City, meanwhile, will attempt to break their duck in the competition, although boss Pep Guardiola could complete a personal hat-trick with victory following successes at the helm of Barcelona in 2009 and 2011.