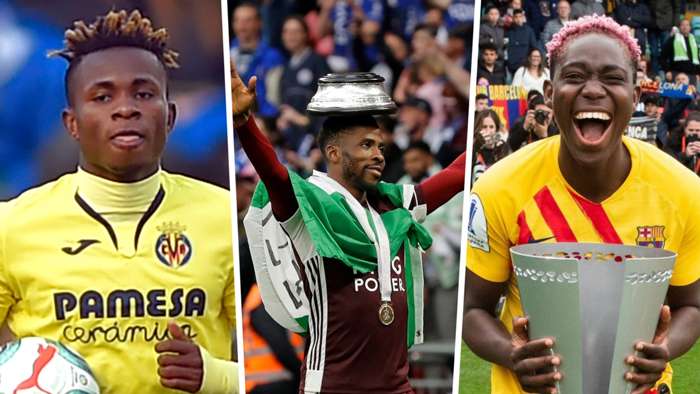 With many European clubs approaching the end of the 2020-21 season, Goal looks at players who did Nigeria proud by winning trophies with their clubs

The fleet-footed winger made 11 appearances in the European competition, scoring one goal and providing four assists in the run to the title win.

Chukwueze, however, missed the final due to the injury he suffered during his side’s semi-final game against Arsenal.

The trophy is the first for the 22-year-old since moving to Europe to continue his development and in the 2020-21 campaign, he bagged five goals and provided eight appearances across all competitions in total among other dazzling displays.

Wilfred Ndidi and Kelechi Iheanacho won the FA Cup title with Leicester City after beating Chelsea in the final.

The Super Eagles stars played key roles in the victory, with Iheanacho scoring four goals in the run to the final, including his match-winner against Southampton in the semi-finals.

Ndidi also played six games in the tournament, delivering solid defensive performances to ensure the Foxes clinch the trophy for the first time in their history.

Iheanacho celebrated the title victory in style wrapping the flag of Nigeria around him, much to the delight of his supporters in the country.

Asisat Oshoala also finished the season on a high with the Barcelona women’s team, helping the club to win the Women’s Champions League.

The forward was a consistent performer in the competition as her side handed a 4-0 defeat to Chelsea in the final to win the title.

The Super Falcons captain bagged four goals in six appearances in the European competition, amid other dazzling displays.

Leon Balogun and Joe Aribo won the Scottish Premiership title with Rangers, the club’s 55th league trophy in their history.

Balogun teamed up with the Gers in the summer of 2020 and immediately hit the ground running winning a number of Player of the Week awards for his fine start.

His contribution helped Steven Gerrard’s men to clinch the diadem while his compatriot Aribo also played a key role in the success, scoring six goals and providing four assists in 25 league games.

Paul Onuachu and Cyriel Dessers won the Belgian Cup trophy with Genk in the 2020-21 season.

Onuachu is arguably one of the most prolific attackers for Nigeria at the moment made a key impact as his side won the domestic trophy.

Peter Olayinka won the Czech First League title with Slavia Prague for the third consecutive time, having also clinched the diadem in the 2018-19 and 2019-20 seasons.

The attacker scored six goals and provided three assists in 23 league appearances in the league as part of his contribution.

Olayinka has been with the Czech side since the summer of 2018 when he teamed up with the club from Gent.