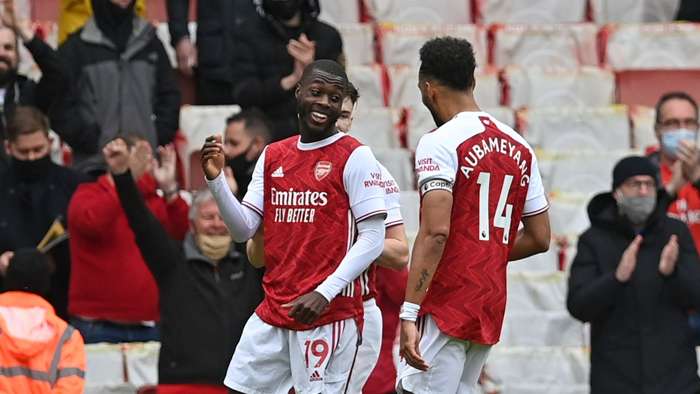 The Arsenal wideman has quietly gone about his business this season and particularly ended this year on a high against Brighton & Hove Albion on the final day.

Which other stars from the continent thrived as the major leagues across Europe closed out this weekend?

It was the forward’s second start for the Red Devils, and it took him only 13 minutes at Molineux to open his account.

Despite making a raft of changes, Man United finished the campaign with a win, ending the campaign on 74 points (eight points higher than last year’s total) and they’ll now look to defeat Villarreal in Wednesday’s Europa League final.

Despite his first-half penalty miss, Delort didn’t hide for the remainder of Montpellier’s encounter at Nantes.

It was the forward’s goal that won the game for the visitors against the Canaries who ended the campaign in the relegation playoff spots.

Delort finished the campaign with 15 goals in 30 appearances, contributing a goal in all but one of Montpellier’s final seven games of the campaign.

After a thoroughly frustrating year for Sadio Mane, the Senegal forward ended the season with a brace in Liverpool’s 2-0 success over Crystal Palace in front of the returning fans at Anfield.

Despite his struggles, Mane entered double figures for the seventh successive campaign in Premier League football, finishing on 11 league goals.

The wide attacker was involved in five goals (three goals and two assists) in as many games to help Jurgen Klopp’s troops end third after a five-game winning run to close out the season.

After his penalty miss against Juventus, it was always going to take nerves of steel for Kessie to step up and put himself in that pressure cooker again.

However, the midfield man came up trumps in AC Milan’s hugely important 2-0 success over Atalanta on the final day where he netted both goals.

Scoring both penalties, coupled with Napoli’s draw, saw Stefano Pioli’s team return to the Champions League for the first time since 2013/14.

The Rossoneri ended the campaign in second spot, with Kessie finding the back of the net a staggering 13 times—all but two were from the spot.