Fernandes, Kane and the Premier League Team of the Season 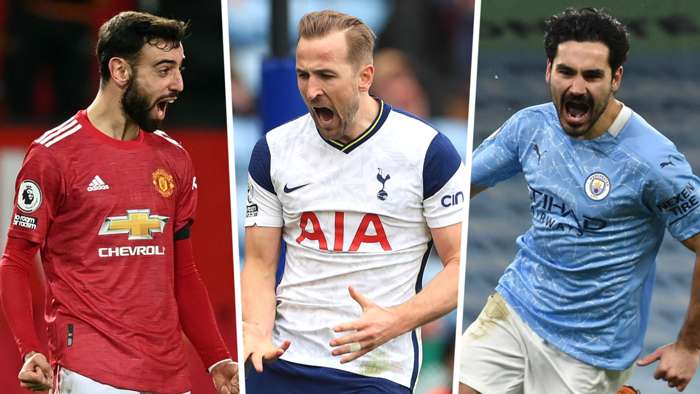 While champions Manchester City ran away with the league title in 2020-21, there were plenty of individuals from other clubs who shone this season

Manchester City claimed the Premier League title ahead of Manchester United, while Liverpool and Chelsea ended up in the Champions League places at the expense of Leicester City. But which players stood out enough to guarantee a place in Alex Keble‘s Premier League team of the season?

Aston Villa’s goalkeeper was probably the signing of the summer. Martinez equalled Brad Friedel’s record of 16 clean sheets for Villa in a single top-flight season, helping transform Dean Smith’s side from one of the leakiest in the division to one of the strongest.

Martinez ranks third in the Premier League for shots saved (15) and second for ‘prevented goals’ (9.71), a WyScout statistic that measures a goalkeeper’s saves against the expected goals (xG) of the opposition shots.

But Martinez’s influence goes far beyond shot-stopping. His unrivalled skill in catching shots and crosses – where others would parry or punch – has completely reshaped Villa’s tactical organisation.

Martinez’s sticky gloves allow Villa to reset and get back up the pitch, hence their strength on the counterattack.

Nobody typifies Manchester City’s season like Cancelo, an intelligent and versatile footballer who nominally played as a left-back or right-back throughout 2020-21, but in reality popped up all over the pitch.

His influence as an inverted full-back has been startling and progressively courageous; at times this season he has advanced in the right half-space like Kevin De Bruyne.

The key to City’s title win was their tactical unpredictability, created by Pep Guardiola through the rotation of full-backs. Depending on the configuration he chose, City could line up with three at the back, dual overlapping full-backs, two extra bodies in midfield, or an extra playmaker in the number 10 position.

Cancelo is the only City player who could perform any of these roles, and from either side too.

Leicester City’s 20-year-old centre-back has been a revelation.

Brendan Rodgers probably did not expect to be able to rely on Fofana in his debut campaign quite like he has, but his aggression and anticipatory skills have already made him one of the most revered centre-backs in the Premier League.

Tellingly, Fofana ranks fourth in the division for interceptions (2.2 per game), a stat normally dominated by defensive midfielders. This speaks to Fofana’s tendency to step out from the back and boldly shut down the opposition play, an eye-catching feature that works particularly well in a back three.

Almost every player who joined the Premier League from abroad last summer has endured a difficult debut campaign in England, which is perfectly understandable given the country has been in lockdown for so much of the last year.

It is even more remarkable, then, that Ruben Dias has been rock solid for Manchester City.

Dias started the most Premier League games (32) of any City outfield player, his power and athleticism not only keeping Aymeric Laporte out of the side but also drastically improving John Stones.

After the fallow year without Vincent Kompany, City have found their defensive leader for the next decade.

Arguably the most consistent player in the Manchester United team this season, Shaw is finally fulfilling his potential – even if Ole Gunnar Solskjaer will want him to improve on his final ball next year.

Adding a touch more creativity to his game is all that is left for Shaw to do following a year in which his defensive positioning has greatly improved and sloppy mistakes have been entirely eradicated.

Recency bias has perhaps seen Gundogan fade from memory and excluded from teams of the season, but it should not be forgotten just how important he was in December and January – the crucial months in which Man City turned their fortunes around.

His run of 11 goals in 12 games through winter saw Gundogan take up a new advanced role in the City midfield and was the catalyst for their revival; Guardiola would not be celebrating a third Premier League crown without that sequence in which Gundogan grabbed the reins.

But the Germany international also makes the team here because of his passing ability and calm presence in the middle of the park.

Guardiola reacted quicker than anyone to how the pandemic affected football, doubling down on slow possession football to battle against exhaustion and the drop in pressing intensity.

The metronomic Gundogan was an essential part of that shift.

West Ham’s superb campaign deserves to be marked in any team of the season, and who better to represent David Moyes’s powerful counterattacking team than Soucek?

He and Declan Rice held down midfield with remarkable dexterity, allowing the Hammers to sit back for long periods and soak up pressure.

Soucek made more tackles, blocks, and clearances than his midfield partner, and also topped the Premier League charts for most aerial duels (450).

Soucek was lethal in attack, too, scoring 10 goals – the third most among midfielders behind Bruno Fernandes and Gundogan.

West Ham would sit deep, out-muscle opponents in their own third, then score from set-pieces – and Soucek was the dominant force in every stage of the plan.

In raw stats alone, Fernandes’s 18 goals and 11 assists is a brilliant Premier League return, and yet many people consider the Portuguese to be overrated, pointing to the fact nine of those goals were from the penalty spot.

But Fernandes does so much more than score and assist, and in Ole Gunnar Solskjaer’s individualistic tactical set-up it is invariably Fernandes hauling United up the pitch and creating chances.

Per WyScout, he created the second-most chances in the Premier League with 36, played the second most ‘smart passes’ with 91 (“a creative and penetrative pass that attempts to break the opposition’s defensive lines”), the most ‘deep completions’ with 117 (“a non-cross pass that is targeted to the zone within 20 metres of the opponent’s goal”), and the most second assists (the pass before the assist) with seven.

In other words, he is the best line-breaker and creative passer in the division, constantly piercing through the opponent to get United forward.

Had Grealish not missed 12 games through injury in the second half of the season, he would probably be in line for Player of the Year, but even having missed nearly a third of the campaign he walks into the Team of the Season.

The Aston Villa captain tops the Premier League charts for key passes (37) and fouls suffered (108), although we do not really need stats to make the argument for his inclusion here.

Grealish glides effortlessly with the ball, drawing multiple defenders towards him to create huge amounts of space for his team-mates.

His creative output was remarkable considering how many games he missed, and had he stayed fit for the season then Villa might even have pushed Chelsea all the way for that fourth Champions League spot.

Son is another player suffering from recency bias, but we should not overlook just how impressive it was to amass 17 goals and 10 assists in a campaign generally deemed a failure by Spurs supporters.

Perhaps the starkest image of the campaign for Tottenham fans was Son’s emotional interview following the club’s 3-1 defeat to Manchester United, the sort of moment that shows just how hard Son was working to cut through the toxicity of Jose Mourinho’s management and drag Spurs into European contention.

In the end, his form dipped and Gareth Bale made the headlines as Tottenham sneaked into the Europa Conference League.

But Son’s influence in the early parts of the season – when he scored 10 goals in his first nine games – should not be forgotten, nor should the memory of his extraordinary partnership with Harry Kane through the first half of 2020-21.

Kane’s capacity for self-improvement is Ronaldo-esque. The 27-year-old has always fancied himself as more of a number 10 than a number nine, and under Jose Mourinho he was finally given the freedom to prove that point.

The results were genuinely astonishing; we need a new word to describe Kane’s quantum ability to be the creator and the finisher simultaneously, not so much a false nine or a nine-and-a-half but a 19: a fusion of both roles.

He won his third Golden Boot with 23 goals and also topped the charts for assists with 14.