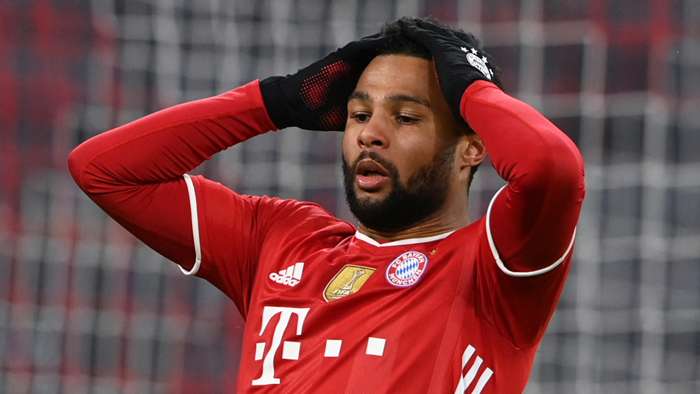 Serge Gnabry feels he has had a disappointing campaign at Bayern Munich, admitting “I am not satisfied with myself”.

Gnabry played a key role in Bayern’s run to an unprecedented treble in 2019-20 under Hansi Flick, recording 23 goals and 14 assists in 46 appearances across all competitions.

The Germany international solidified his reputation as one of the top wingers in Europe in the process but has allowed his standards to dip this term, which he has admitted ahead of the final day clash with Augsburg.

“I am not satisfied with myself. I wanted to lift my goal and assist stats,” Gnabry told Goal and Spox. “Unfortunately, there were too many games in which I missed very good chances. I have to work on that.”

The 25-year-old has added another Bundesliga title to his collection, but went onto express regret over Bayern’s failure to defend their DFB-Pokal and Champions League crowns.

“After all our successes last season, I personally would have liked to win more than one title again, because I always want to achieve as much as possible.” he added.

“The second-round knockout in the German cup against Kiel was particularly annoying, that simply shouldn’t have happened to us, but the even bigger disappointment was the quarter-final elimination in the Champions League against PSG.”

Gnabry has featured in 37 games for Bayern this season and has 10 goals to his name, with his last effort coming in the 4-0 win over Stuttgart in March.

The attacker has managed to set up a further six for his team-mates, but will have the chance to increase those numbers against Augsburg on Saturday as Flick looks to secure his final victory as head coach.

Flick will be stepping down from his role as manager this weekend having reached an agreement to cancel his contract two years early, with RB Leipzig’s Julian Nagelsmann replacing him.

Gnabry worked with Nagelsmann while on loan at Hoffenheim at the start of his Bayern career, and is certain that the 33-year-old is the right man to take the German champions forward.

“He convinced me to go to Hoffenheim instead of spending another year in Bremen. I developed very well under him,” he said. “He is still very young, has a good drive and attaches great importance to small details, especially tactically, he has always set us up excellently.

“He always wants to be perfectly prepared in every training session and in every game analysis. We usually practised the things we didn’t do well in the previous game over and over again until we did it better.

“Julian Nagelsmann is a motivated coach who always gives 100 per cent. I get on very well with that because I always give everything too. He is someone who makes his players better. I’m very happy to be working with him again.”