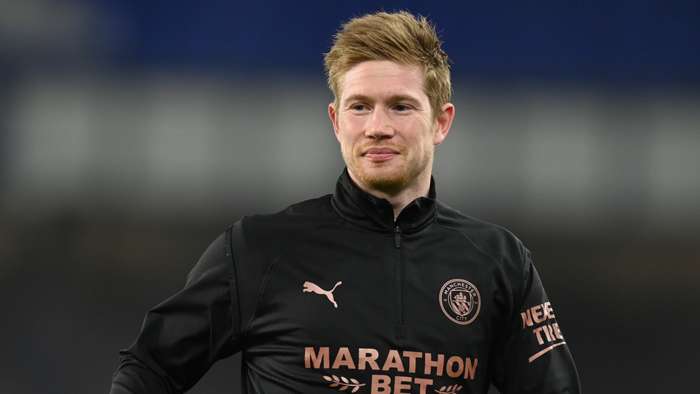 Kevin De Bruyne has returned to training with Manchester City, allaying fears that he could miss the Champions League final.

The midfielder, who has been named in the Belgium squad for Euro 2020, missed City’s last two matches with a muscle injury with the European final in Porto just 12 days away.

However he is set be in the squad for Tuesday’s trip to Brighton as the new Premier League winners step up their preparation for their first Champions League final, against Chelsea.

“Kevin has trained the last two days and he feels good,” manager Pep Guardiola said in his news conference. “Kevin is important like everyone. When we are able to stick together and push each other, it will be possible to win [the Champions League].

“Everyone is in the same level. We’ll see what his level is, he’s fit and ready to play.”

City were confirmed as the Premier League winners last week when second-placed Manchester United were beaten by Leicester, but while Guardiola’s side had three games with nothing riding on it, Chelsea lost an FA Cup final at the weekend and are still to confirm a top-four finish.

“The mood is really good – they’ve been training really well and everyone is focused,” the City boss added of his squad. “People know they have to maintain their rhythm to play the final in the best condition as possible, and on the day off people relax and then we focus in training.”

Asked if it was advantage for Chelsea to have bigger games in the countdown to the final, Guardiola added: “I’m only concerned about what we have to do – to prepare as best as possible. It’s not my business.

“We’ll have six days to focus on the final after Everton. Now it is Brighton. We won’t be ready if we don’t prepare for Brighton. I didn’t speak one second about Chelsea.

“Tomorrow we’ll play to win again and this is the best way to arrive to the final. In the six days [after the final game], we’ll be more focused on Chelsea.”