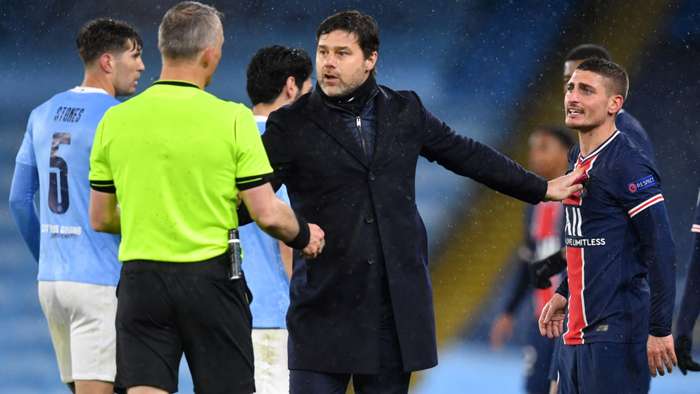 Paris Saint-Germain star Leandro Paredes was the recipient of a foul-mouthed insult from referee Bjorn Kuipers during his side’s Champions League defeat to Manchester City, his team-mate Ander Herrera claims.

A double from Riyad Mahrez sent City into their first-ever final at the expense of PSG, who went down 4-1 on aggregate after failing to score at the Etihad Stadium.

The final minutes saw tempers boil over, with Angel Di Maria seeing red and players from both sides clashing before Kuipers brought proceedings to a close.

“The referee said ‘f*ck off’ to Leandro Paredes, if we say that, we are out for four games,” Herrera complained to RMC Sport after the final whistle.

The ex-Manchester United midfielder was joined by Marco Verratti in alleging misconduct on Kuiper’s part.

“He also told me ‘f*ck you’ a few times,” the Italy international added to RMC Sport.

The Ligue 1 giants’ quest for a first Champions League title will have to wait another year after once more failing to lift the title in 2020-21.

PSG, who went down in the final last season to Bayern Munich, have changed their coach five times since being taken over by Qatar Sports Investments in 2011, but Mauricio Pochettino is now the latest man to fall short in the competition the club most desires.

“I think we were the best team for 70 minutes. We tried everything, when we attacked, we caused them problems,” Herrera added.

“We can leave here with our heads held high. We’re sad but it’s not easy to be a finalist and to be in the top four teams this season.

“We must not change what we did today. We played well, attacked well, but it is true that there are things that need to be improved. But it’s not easy to be a finalist then in the four best teams.”

Verratti added: “Of course there is disappointment, because we believed in it. Until the red card, we were in the game. We created a lot of chances, we played a lot better than them. We conceded a goal on their first attempt.

“We fought until the end, we tried everything. It’s like that in football. We have been in the last four the last two years, and it’s good. I’m sorry, but we’ll try again until we die.”