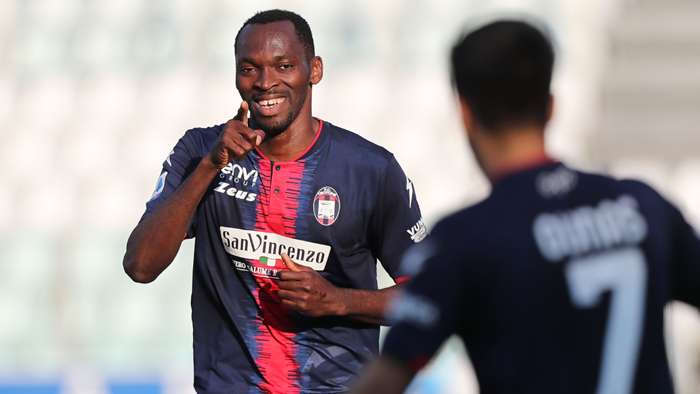 With the Pythagoreans relegated to the second division of the Italian league, the Nigeria international has been backed to remain in the top-flight

Crotone sporting director Giuseppe Ursino believes Simy Nwankwo has the quality to continue his stay in Serie A.

The 28-year-old made frantic efforts to try and save the Pythagoreans from dropping to the Italian second division, scoring 19 league goals and providing two assists.

His efforts were, however, not enough to help Serse Cosmi’s men maintain their top-flight status as their relegation was confirmed after their defeat to Inter Milan recently.

Given the contribution and the quality of the Nigeria international, Ursino is hopeful the forward will soon find a new club in the Italian top-flight.

“He has grown a lot over the years, this year out of the ordinary. He can easily stay in Serie A, in a medium-high range,” Ursino told TMW Radio.

“He’s very intelligent and never gets depressed. He’s there on the bench but he always wants to get to the top: I’ve seen him over the years, from the first minute of Crotone he had certain ambitions and for me he will succeed”.

The German tactician recently advised the lanky forward to leave Crotone in order to boost his chances of returning to the Super Eagles.

“I know Simy very well, it was me who called him for the 2018 World Cup in Russia. He performed well at that competition, after which he played for some time in the Italian Serie B. I have never forgotten about him and have always observed him, not just now that he is doing so well,” Rohr said.

“However, the competition is huge: we have Osimhen, Iheanacho from Leicester and Onuauchu from Genk, who is very similar to Simy in terms of features and physical structure, without forgetting Sadiq and Ighalo.

“So it is very difficult to be part of the Nigeria attack, we have very good players. As I said before, I have never stopped following his performances, but I believe that next year he must go and play in a club and in a team that is stronger than Crotone.

“It will not be equally easy, but he would already have a better chance of returning to the national team.”

Simy’s contract with Crotone will expire in the summer of 2022 and the attacker will be expected to sort his future out.