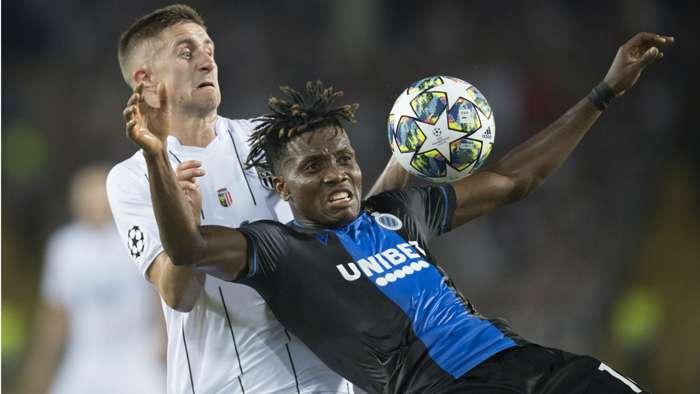 David Okereke was in action as Club Brugge battled to a 2-2 draw against Anderlecht in the Belgian First Division A play-offs.

The Nigerian forward came on as an 80th-minute substitute for Ignace van der Brempt while his compatriot Paul Mukairu was an unused substitute for Anderlecht on Sunday.

After a goalless first 45 minutes at Jan Breydelstadion, Noa Lang opened the scoring for the hosts four minutes into the second half.

The lead did not last long as Anderlecht fought back with a leveller from Lukas Nmecha in the 64th minute and they turned the game around with a second goal from Jacob Bruun Larsen in the 86th minute.

Anderlecht were on the verge of grabbing maximum points but a late goal from Bas Dost denied them victory and both teams settled for a share of the spoils.

Despite the dropped points, Club Brugge remain at the top of the play-offs table with 39 points after their overall points at the end of the regular season were halved.

Paul Onuachu’s Genk are second with 31 points after their 3-2 win over Royal Antwerp on Friday and Anderlecht follow in the third spot with 30 points.

Okereke scored four goals during the regular league season but he will be focused on helping Club Brugge secure maximum points when they visit Onauchu’s Genk for their next match on Friday.

After sitting on the bench on Sunday, Mukairu alongside Ghana’s Majeed Ashimeru will hope to steer Anderlecht to victory when they host Royal Antwerp for their match on May 8.

The Nigerian forward scored two goals in 23 appearances during the regular First Division A season.

Mukairu is currently on a season-long loan from Turkish Super Lig club Antalyaspor, where he made his professional debut in 2019 after leaving Abuja-based club FC Heart Academy.

The 21-year-old rose through the ranks in Antalyaspor and he scored three goals in 24 appearances during the 2019-20 Super Lig campaign.

Okereke, however, earned his Super Eagles debut in 2019 and he was an unused substitute in Nigeria’s 1-0 win over Egypt in an international friendly match.

He also played a role in helping Dream Team VII qualify for the U23 Africa Cup of Nations in Egypt two years ago with his goal in the 4-0 thumping of Libya.