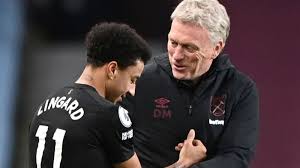 Lingard is on loan with the Hammers until the end of the season, having joined up with the club during the winter window.

The England midfielder scored twice on his debut against Aston Villa on February 3, although he was ineligible for West Ham’s most recent game which was, coincidentally,  an FA Cup tie at Manchester United on Tuesday.

What did Moyes have to say about Lingard?

“I refer back to my time at Everton when I brought Phil Neville in and I brought Tim Howard in,” he said.

“Phil Neville was great for his mentality and what he brought, it really gave us another edge. Him as a player as well gave us something else. I’m hoping Jesse does the same.

“He’s only here in the short term but already I’ve spoken with Sir Alex, who asked me to pass on his best to Jesse; he mentioned he was thinking about him because Sir Alex had him as a boy at Old Trafford.

“That just shows you the interest Sir Alex has in all the young players he had, all his teams and all his clubs he shows a great interest in them and he was pleased Jesse got off to a good start.”

What’s next for West Ham?

The Hammers currently sit sixth in the league, having been one of the surprises of the Premier League thus far.

West Ham will play that game on Monday when they take on Sheffield United at the London Stadium.

After that, though, they’ll face back-to-back tests as West Ham will then look ahead to clashes with Tottenham and Manchester City to close out the month of February.

“As for myself, I’ve been a bit surprised because I’ve said many times that most of the teams in my career I’ve tended to be managing around the top of the league, not around the bottom of the league. So it’s only a little bit in recent jobs where I’ve been asked to do that.

“But I’m hoping that the future is we’re going to be managing West Ham around the top of the league.”