LATEST POST
Home Article Pep Guardiola: Manchester City unbeaten run does not give side any pre-match edge over Tottenham

Pep Guardiola: Manchester City unbeaten run does not give side any pre-match edge over Tottenham 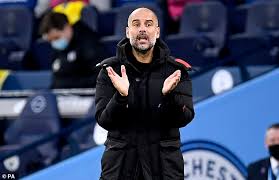 Pep Guardiola insisted that Manchester City’s 15-game winning run does not give them any additional psychological edge as they prepare to face Tottenham on Saturday.

City have returned to their imperious best in recent months as they have stormed back to the top of the Premier League, winning their last 15 games in a row in all competitions – the longest run by a top-flight side in English football history.

Guardiola’s side are in fact unbeaten in their last 22 games since losing 2-0 to Tottenham in November, but Guardiola played down the significance of the run ahead of the return clash between the two sides, live on Sky Sports on Saturday.

“We are not [unbeatable],” Guardiola said. “The 15 games in a row doesn’t help us to start 2-0 up before the start of the game. I said many times it is nice and helps us to be where we are in the Carabao Cup, FA Cup, Champions League and especially the Premier League, but no more than that.

“We have to start again tomorrow to do the next one. It is an important week with three strong teams and this is the target [to win all three].

“We must try in this time to recover, see what our opponents [Spurs] will bring, what they have done in the game where we played there [in November], what we have to do to play better and beat them. This is the only concern I have after winning in Swansea.”

Phil Foden has received praise from all angles for his role in City’s resurgence, with Wayne Rooney adding his name to a growing number of voices who insist Foden must be part of England’s squad for the upcoming Euros.

Foden has often been compared to former City midfielder David Silva, but Guardiola praised Foden further, believing the 20-year-old has even more facets to his game.

“Phil learned from David as everyone did but Phil has a specific thing that he still cannot be like David,” Guardiola added. “But instead he has other things that are special, too. Phil can play as a winger or in the middle as well.”

City pair Ruben Dias and Rodri are both expected to be fit for Saturday’s clash.

Record goalscorer Sergio Aguero is also nearing a return after a trouble-hit first half of the season.