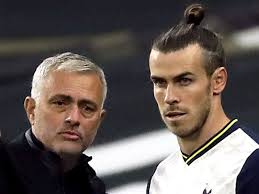 Jose Mourinho has hailed the impact Ruben Dias has had on Manchester City’s defensive record this season, as his Tottenham side prepare to face the Premier League leaders.

City boast the best defensive record in the Premier League this season, having conceded only 14 goals from their opening 22 matches, and host Tottenham – the team with the second-best record (22 conceded) – live on Sky Sports Premier League on Saturday Night Football.

Dias was linked with a potential move to Spurs last summer before joining City from Benfica for £65m and Mourinho, who believes his own defence can still improve, says his fellow Portuguese has had a major part to play in Pep Guardiola’s defensive improvement

“Ruben has an incredible influence on that improvement,” Mourinho told Sky Sports. “I’m very pleased that a very good kid, very humble, very hard working, has arrived in the Premier League and makes the impact that he has made. I’m very, very pleased with that.

“(Our defending) could be much better I can tell you. We work so hard on defensive organisation. The team makes great efforts to try to be solid and consistent

“I always say and think and feel (that) you can make mistakes but you cannot let your team-mates, supporters and everyone down with your attitude.

“For me, attitude is more important than quality because attitude is what’s directly related with your personal pride as a man and as a professional. The attitude has to be untouchable, and I have to say that many of my players have been amazing in their effort.”

Mourinho’s Tottenham have struggled for form of late, ending a run of three successive Premier League defeats with a home win over West Brom before being knocked out of the FA Cup by Everton in a dramatic extra-time defeat on Wednesday.

Mourinho’s relationship with on-loan Gareth Bale has also come under the spotlight after he said the player’s suggestion he was ready to play was “a contradiction of reality” due to his ongoing fitness problems.

The Portuguese boss believes his team need to be perfect if they are to beat City and close the gap on the top pack.

“There is only one way to cause them damage and that’s to play a perfect game,” he said. “If you are very good with the ball and not very good without the ball you have no chance.