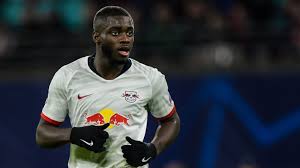 Asked by German publication BILD if he could confirm an agreement had been reached between the clubs, he said: “I can, and we are very happy about that at FC Bayern”.

The German champions appear to have beaten both Liverpool and Chelsea to Upamecano – one of the most sought-after defenders in the game.

Salihamidzic added on Friday: “We had very good, intensive and professional discussions with Dayot and his agent Volker Struth over many months. We knew that we had very strong competition.”