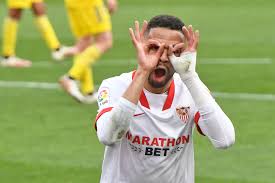 Thanks to his impressive spell at Leganes, Morocco international En-Nesyri joined the Andalusians on January 2020, for a reported fee for €25 million on a five-year-deal following the departure of strikers Mu’nas Dabbur and Javier Hernandez.

En-Nesyri made a slow start to life at the Estadio Ramon Sanchez Pizjuan – finding the net on four occasions in 18 Spanish top-flight games as Los Nervionenses finished fourth in the 2019-20 campaign.

This season his performances have been nothing short of splendid – scoring 13 goals in 21 games so far – joint-second with Barcelona’s Messi and three goals short of leading scorer, Suarez of Atletico Madrid.

In an interview with Goal, Kanoute, who enjoyed a trophy-laden career with Sevilla in his seven years at the club, describes the ex-Malaga star’s performances as ‘complete’ and feels he is in line to win the Pichichi trophy, although he warned that the form of Julen Lopetegui’s side would also play a crucial role.

“Well, in the long run, we would see because obviously he did a fantastic job in the first half of the season and I would like to describe his performances as really complete,” Kanoute told Goal

Advertisement
during a virtual La Liga chat with media on Thursday.

“He is not only scoring goals, I think what Sevilla value a lot is the work he is doing for the team; he can hold the ball up upfront, can also run in space and can create space for others.

“So, we will see at the end of the season, but I feel if Sevilla stays competitive in La Liga until the end, he has a good chance of winning the Pichichi trophy this year.”

En-Nesyri would be hoping to add to his goal tally when Sevilla, who are unbeaten in their last eight matches across all competitions, host relegation-threatened Huesca on Saturday evening.

With 42 points from 21 games, Lopetegui’s side occupies fourth spot in the Spanish elite division log.